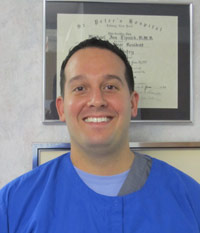 He is a member of the American Dental Association, New York State Dental Association, and the Third District Dental Society. He enjoys attending continuing education classes to stay up-to-date on the many advancements in dentistry, especially the Yankee Dental Congress held every January in Boston.

Dr. Giglio lives in Bethlehem with his wife Katie and two daughters Isabella and Giuliana.